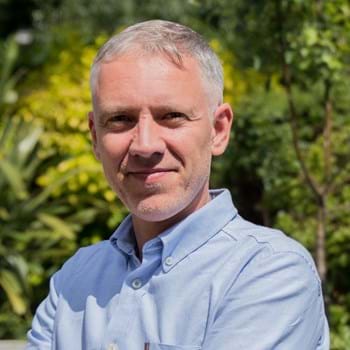 They have since produced interactive films, VR experiences, workshops, and accessible environment guidelines aimed toward improving employment opportunities for neurodivergent people at the BBC and beyond, sharing this work and content to contribute to the growing Neurodiversity conversation.

Sean’s current role as User Experience Principal, brings this experience to researching and developing ideas on Cognitive Design, a proposal for a new design framework with Neurodiversity at its heart.

The ability for organisations to compete on the basis of innovation has become more crucial, but if we are all applying the same design thinking, to the same data gathered, from the same design research, where will the innovation actually come from? Appreciating and designing for our Neurodiversity will enable new perspectives and different ways of thinking, that spur more creative solutions and innovations.

Hello.  Sound is all right?  Everybody can hear me?  Sounds good.  Excellent.  Thank you for coming and listening to me, probably waffle for the next, 20-25 minutes or so, I think we have got.  I'm here to, let me take that away, lazy bear, a nice start.  More for me than you, but there you go.

I will move it off.  I'm a UX principal for the BBC, in charge of a research initiative called Cognitive Design.  I also work alongside my colleague, Nina Huck on a staff inclusion initiative called BBC Cape, removing barriers thinking about neurodiversity, like autism, dyslexia, dyspraxia and how we remove barriers in the workplace, so we can make things as accessible and inclusive as possible for people with neurodivergent conditions.  The reason we use avatars, we have had photographs taken together and we look very uncomfortable.  Lina decided avatars are the way forward.  I absolutely agree.  So, neurodiversity, what is it?  What is it about?  It is basically, the range of function and behaviour.  We are all different, we think differently and there is nothing wrong with that in the same way that we have bio-diversity on the planet, similarly we have neurodiversity and along with that, obviously, are neurodiversity conditions, as I have already mentioned and we came up with the initiative CAPE to think about how we design things to accommodate people.  And, as I said, it stands for creating a positive environment and this is how we got into cognitive design, I will explain that a bit more as we go along.  We started thinking about, we started talking about the idea of neurodiversity with Colin Burns the chief creative officer at the BBC at the time.  He was interested in this concept because of, not so much making the accessibility side of things but flipping it around and looking at the positive attributes.  A will the is known about the technical abilities within neurodivergent conditions -- a lot is known but there is an equal creative and substantive ability within that.  Colin was looking at the creative ability in the UX team.  He started talking to us about how we apply it and how we think about neurodiversity as part of his creative strategy.  As part of that research, as we were looking around, we found a few things that started us along the path to cognitive designers, as it became known.  One of them was a quote from Todd Symmons, sounds very important, I have not actually met him.  I realised that when I was pulling this presentation together, so I will make an effort to get in touch with the guy.  He basically says "If anybody does the same thing in the same way with the same methodologies and tools, with access to the same research data, what is the difference in what we make?  Where are we going with this?   We thought it resonated because we were talking about positive aspects of people coming in who could think differently and would perceive challenges and tasks differently and find different solutions.  We started thinking about the challenges that Colin was facing within our organisation.  So, it's become recognised that, with the ever-changing pace of technology, that the ability to innovate is becoming crucial for organisations to keep pace and to be competitive and the BBC is no different to anybody else in that, in that we have to think about what is happening and where we are going and we have to continually innovate the product we have.  We were thinking about the creative solutions and methodologies and tools people use, we were thinking that actually, maybe we are getting to a point of a status quo, they are not really evolving, they are not changing, it is more an iterative step process, they have served everybody with great purpose and great functionality and they still do but it is where are they going, what is happening, referring back to the quote that we had previously from Todd Symmons.

And this kind of led us to think:  OK, maybe we are heading for a potential, an emerging crisis within these creative methodologies, if we are all getting to the same point and the same place, where is the change going to happen?  How will we continually, innovate.  We started along with process of thinking about cognitive design and what it meant.  Because we were talking about cognition we went to neuroscience, cognitive psychologist and the advances in research that are going on.  Especially with the explosion around artificial intelligence, people are increasingly more interested in how we think and what we think and how the brain functions and works.  So, we think if we understand this better, if we look to apply neuroscience, we can design things that meet user needs better because we can understand not just the what but the why but interesting and equally it is introspection as well.  We are not just focussing on the neurosciences as applied to the audience or user, we are thinking about what does it mean for us, for our staff, for where we are?  How do we, what is the impact for them?  How can we UX UX.  That started us along a line of thinking.  This is something that we started 12, 18 months ago now, we are still at the beginning of the research.  But we think, increasingly there is something in here.  So, we started looking into the neuroscience of things and thinking about - well what is there to learn?  And we started coming across the idea of the conscious brain and unconscious and subconscious.  It is unconscious and subconscious, doesn't look as good, so I used the one.  But effectively, if we are look looking at habits and behaviours, we think we are looking at the conscious side coming up with critical thinking and short-term memory but we realised that only accounts for 5% of what goes on in somebody's brain.  The 95%.  Whoops - sorry.  There we go, I'm getting eager.  I shouldn't have put transitions in.  It is 95% of what happens, in the unconscious and subconscious, the moments of somebody's brain that happen within a fraction of a second that influence that conscious side.  That is the bit we need to understand, rather than just asking the what and getting answers from those people we have to understand the why behind those decisions and then we can think about how and why we do things and what this means for people.  You have already seen this, but there we go!

So we are also thinking about, how do we do this?  The reason it has become, I suppose practical new that we can do this, is the fact that technology that enables us to measure and track this is significantly more affordable now.  No longer do you have to have the big static units at a facility or a university that can accord this kind of thing.  There is wearable tech now, you can measure electrical impulses from the brain with wearable tech, that can communicate wirelessly, so people are relatively unencumbered.  We have advancements in virtual reality to people, people into places and with physiological measurements, we can measure heart rate and perspiration rate.  We can understand how when people are getting anxious and understand when they are stressed.  If we can measure this and understand the neuroscience behind it, we can start unpacking the why behind decisions.  It is infinitely more affordable and much more practical to do this now.

Equally, as we have started exploring this, we are uncovering that more and more people are starting to look towards neuroscience to understand the principles of why they are designing.  Neuroarchitecture is something coming up, where within that field they are starting to understand the impact of the built environment with the buildings they create and spaces that are built within them, have an impact of our experiences of that establishment.  Increasingly they are looking at neuroarchitecture, the idea, for example in the picture there from a university in Berlin, it is an idea in making things easier so we can navigate around buildings subconsciously because we are aware that different colour schemes mean we are in a different part of the building and we are start doing things unconsciously, rather than looking at the maps and trying to decipher things, it is much more besides that as well.  And probably something that has been around for longer, the idea in brand design.  So the cognitive motivational triggers that supermarkets are well aware of, as are brand designers and package designers, so the idea we have the puppy eyes there, eyes are a big trigger and within this, people understand that immediately you have this image of the puppy and the eyes looking at you, and people are starting to form emotional connections with that product, so out of everything you have got there, the chances are, you are going to pick that one. So, the precedent there and the science is available and the research is increasingly coming out.

Democracy is a Design Problem

Beyond the UX Tipping Point

The Death of Intent

The experience of care

How Accessibility can improve UX for everyone